Clairemont —  Before she suffered a brain hemorrhage on July 24, 2017, Ruby Melchior was a freshman pole vaulter on her high school track and field team. But a lot has changed since then.

Ruby, now 17, had to learn to breathe, eat and talk again after her brain injury, and she now uses a wheelchair. But one thing that hasn’t changed for Ruby is her participation in athletics. The Scripps Ranch High School senior is now in training for the spring track and field season as a seated shot put athlete. She hopes to make it to the California Interscholastic Federation (CIF) state championships in Clovis in May. 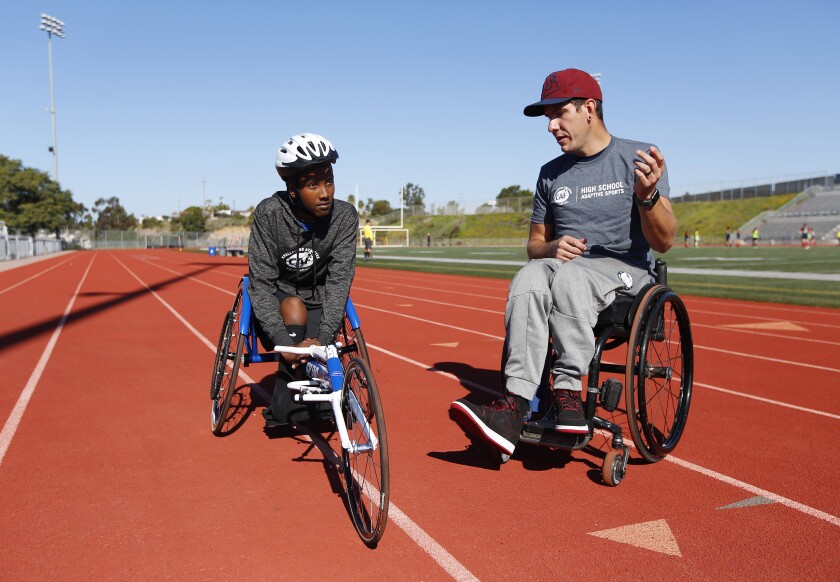 Under state law, students with disabilities are equally entitled to participate in athletics, but most public high schools lack the adaptive equipment, coaching expertise and training time to work with the students. In 2016, CIF began allowing wheelchair and ambulatory students with disabilities to compete in track and field championships, but participation has been minimal.

In each of the past four years, just 16 to 18 para-athletes have competed in the CIF championships. With the new High School Adaptive Sports Program, officials with Challenged Athletes hope these numbers will begin to grow.

“We know there are 600,000 high school students with disabilities in the U.S., so there are a lot of students out there who are missing out. This is the tip of the iceberg,” said Nancy Reynolds, senior director of business development for Challenged Athletes.

The new program had a trial run last January at Clairemont High with just eight students, including Ruby, who said she never thought she’d be able to compete again.

“I didn’t know how to participate, but I found out last year that I could,” she said on Sunday. “I love this program because it keeps me involved in school activities and it’s a way to make a lot more friends. I’m excited to start the season again.”

Joel Gomez, 16, of Encinitas was also looking forward to Sunday’s kickoff. Born legally blind, he’s an online student at Classical Academy High School in Escondido and a top-notch runner. Last year, he earned gold medals in the 400- and 1,500-meter races at the World Para Athletics Junior Championships and 11th place in the 1,500-meter race at the World Para Championships in Dubai, United Arab Emirates.

Joel said he’s excited about the high school adaptive sports program because it empowers students and it changes the public’s perceptions about people with disabilities.

“Events like this are really important. It lets these students know there’s a place for them in the world of sport,” he said. “I like it when people are surprised when they see me run because it proves that we can compete with the best of the best.” 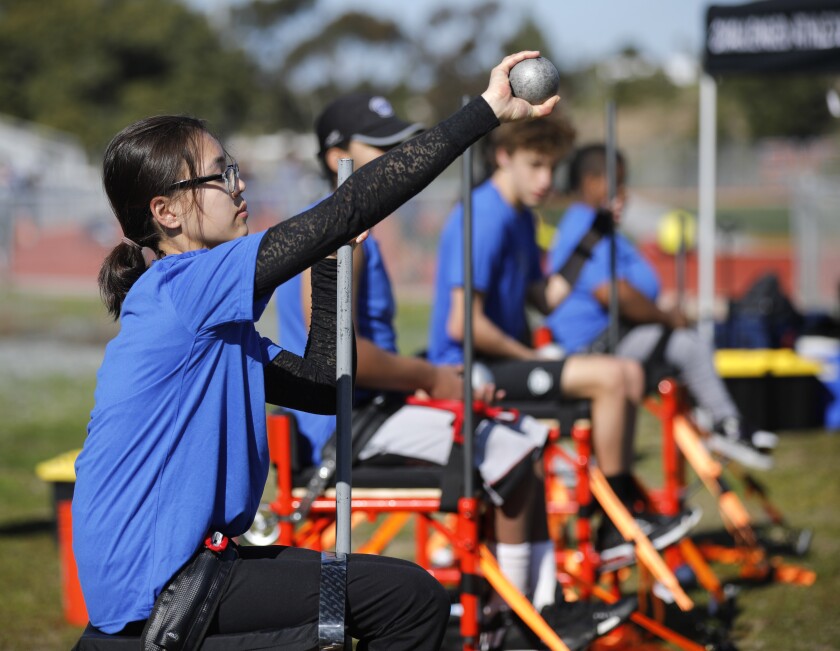 Scripps Ranch High student Ruby Melchior works on her shot put technique during an adaptive sports clinic put on by the Challenged Athletes Foundation at Clairemont High on Jan. 12, 2020. Melchior, a former pole vaulter, suffered a brain injury and is now training in the seated shot put.

The new program’s long-term goals are to host annual six-week training sessions for para-athletes in all 10 CIF sections of California. This year, the program is only being offered in San Diego and in the Bay area, where 12 para-athletes started training Sunday in San Lorenzo.

The $500,000 program provides six weeks of free coaching by Paralympians and world and nationally ranked para-athletes in wheelchair racing, ambulatory sprints and seated and ambulatory throwing. It offers season-long loans of racing wheelchairs and shot-put seats and it provides online videos for training. It will offer grant opportunities for students who want to acquire their own equipment and travel funds for competitions. And it will also provide resources for parents, coaches, school administrators and healthcare providers.

The six-week training program in San Diego was underwritten by Paula Whalen, who has funded several Challenged Athletes adaptive surf clinics in memory of her husband, Ken Whalen. Back in 2013, he discovered CAF and was so inspired by its athletes that he was planning to compete in the foundation’s 2014 Million Dollar Challenge bike ride when he suffered a massive stroke and died at age 48. Paula said her late husband graduated from Clairemont High, so he was there in spirit on Sunday.

Among the coaches training the local student athletes is runner Kym Crosby-Hightower, 26, of Chula Vista. Visually impaired since birth, she earned a bronze medal in the 100-meter race at the 2016 Paralympic Games in Brazil. She said the program could prove a watershed event for California high-schoolers with disabilities.

“I’ve talked to students who didn’t even know there were sports available to them. Knowing they can compete is huge,” she said. “I definitely think this will increase participation in high school athletics.”

Reynolds with CAF said that in the year since they held the program’s trial run, she has seen amazing results.

“Confidence has been the big thing for these kids, and the camaraderie I’ve seen on their track teams, and even from the teams they’re competing against, has been so special to watch,” Reynolds said. “It makes everybody better.”

For information on the high school sports program, visit challengedathletes.org/hsadaptivesports/.